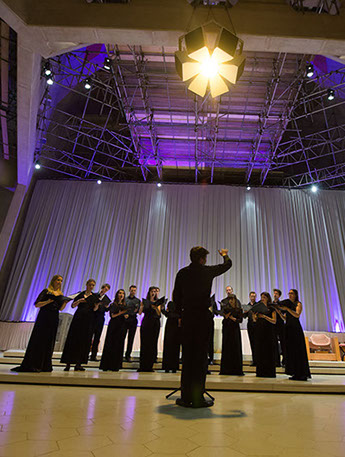 The Erebus Ensemble was formed in 2012 and has in the intervening period gained a fine reputation for the clarity and power of its performances. The group was a prize winner in the inaugural London International Acapella Choir Competition at St John's Smith Square and has for the last three years been the Ensemble-in-Residence at the Bristol Proms in the iconic Bristol Old Vic Theatre. Notable performances at the Bristol Proms have seen Erebus perform six forty-part commissions by composers Nick Lloyd-Webber, Murray Gold and David Bednall to complement the great tour de force, Spem in alium by Tallis, and staged productions of Dido and Aeneas and Messiah with The English Concert and Harry Bicket. They continue to work with The English Concert and in 2018 will perform Messiah at Manchester's Bridgewater Hall and Bach's B minor Mass at Bath Abbey with the orchestra.

The group has become known for its versatility and is equally comfortable in staged productions and traditional concert performance. The focus of the group continues to be Early Music and recent programmes have featured Sheppard's Media Vita, Tye's Missa Euge Bone and Scarlatti's 10-part Stabat Mater.

Future projects include an appearance the Clifton International Festival of Music, their second CD, featuring the music of John Sheppard, and a tour of the East coast of America.