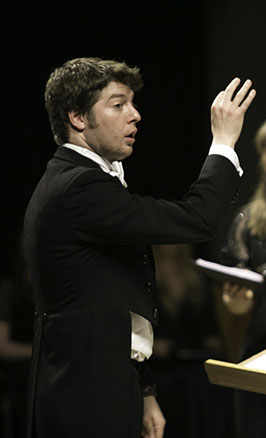 “Tom Williams has a remarkable ability to balance and shape the textures of these great and complex devotional works.”

After some years as a not terribly good singer, Tom Williams turned his hand to choral conducting and has since enjoyed some success across a range of repertories, but most especially Renaissance polyphony. As a postgraduate at the University of Bristol, Tom established The Fitzhardinge Consort and toured and recorded with the group until 2012 when a move to London prompted him to start afresh, and The Erebus Ensemble was born. He has since performed around thirty concerts with the group in the UK and across Europe. He directed the last night of the Bristol Proms in 2015 in a programme centred around Tallis's forty-part motet, Spem in alium. The concert, Songs of Hope, premiered six forty-part commissions, among them works by Nick Lloyd-Webber, Josephine Stephenson, Murray Gold and David Bednall. Tom is passionate about multi-discipline performances and has curated and directed programmes for the Royal Collection of Leonardo Da Vinci sketches for the Bristol Museum and Gallery, and the Angel Trail series at the National Gallery. He has collaborated with celebrated theatre director, Tom Morris, on many occasions and has staged Purcell's Dido and Aeneas and Handel's Messiah with Morris in recent years. He recently collaborated on a revision of the Messiah production, which ran for four performances at

the Bristol Old Vic, toured to Manchester’s Bridgewater Hall and Cambridgeshire’s Saffron Hall, and was shown in cinemas nationwide.

Tom is an Assistant Director of Music at St Martin-in-the-Fields, Trafalgar Square, where he conducts the choir of St Martin's in the Sunday liturgies and the Church's major festivals. When not waving his arms, Tom is a keen scholar and speaker on music and has given lectures on subjects ranging from Allegory in the Eton Choirbook collection to the Tintinnabuli style of Arvo Pärt. He enjoys leading choral workshops and has done so across the UK, the Netherlands and in France.

He is the Artistic Director of the Clifton International Festival of Music, which has played host to leading lights in the world of classical music, including The Tallis Scholars, I Fagiolini and The Sixteen.

In an ideal world he would have played rugby for Wales whilst opening the bowling for England, but a deep-seated hatred of physical exercise prevented this. His hobbies include real ale, watching(!) rugby and cricket, theology, name-dropping and, on the rare occasions that it has happened, having his name dropped.